With the release of the new Sony RX0 II it seems Sony is moving this product line more into the area small vlog cameras and action cameras. The new RX0 II offers 4K recording internally to a micro SD card (full pixel readout and no pixel binning), they integrated a 180° flip screen and added electronic image stabilization. (In contrast RX0 had a fixed LCD screen, no image stabilization and could only record 4K to an external recorder). Compared to most “small sized” cameras Sony RX0 II offers an impressive 1.0″-type Exmor RS CMOS sensor, the same sensor also used in the RX100 camera series. So, let’s compare the new Sony RX0 II with GoPro Hero7 black and DJI Osmo Pocket:

GoPro
GoPro is distinguished for its very wide angle lens and the characteristic look. Some users prefer that, some oppose it. Especially because of the fisheye effect that results of such a wide angle lens when an object is close to the camera. The wide angle has its benefits: the focal length is larger, hence the whole video is sharp which means all objects are in focus. On the contrary many users favour a blurry background which looks a bit more cinematic. DJI Osmo Pocket offers that, but more on this later. The wide field of view is also beneficial when mounted close to the action as the video seems to be more dynamic. If you don’t want that fisheye effect, you can choose linear mode on GoPro, but be aware, the highest resolution available in the mode is 2.7K with 60fps – not 4K!

DJI Osmo Pocket
As many users dislike wide angle lenses with its fisheye effect, so DJI Osmo Pocket’s videos might be more appealing. It uses a narrower field lens and that results in less distortion of the image. The narrower angle lens also results in a shorter focal range and that gives you depth of field. In other words you can film yourself in focus when the background is a bit blurry. On the downside you of course have to control focus and I experienced that it is often hard to fine tune. Especially when not using DJI Osmo Pocket with a smartphone connected. Autofocus is available but often has some problems to lock an object. When Osmo tries to focus a moving object in continuous focus mode you notice that Osmo constantly tries to refocus for a better result ending up with a jerky video.

Sony RX0 II
Sony also offers a narrower field of view similar to DJI Osmo Pocket. You get an even blurrier background as a result of the larger sensor. But RX0 II doesn’t offer continuous auto focus. When you hit record, the focus is set and doesn’t change during recording. So you have to avoid filming objects close to the camera and far away objects in one shot, that’s inconvenient. As another benefit of a larger sensor you can achieve better results in low light situations. So the new RX0 II combines some features of GoPro Hero7 and DJI: It offers a narrow field of view with blurry background like DJI Osmo Pocket in a rugged body like GoPro Hero7 black.

GoPro is marketed to have “gimbal like stabilization” with its hypersmooth setting. GoPro really did an amazing job with its firmware. Sony RXo II also comes with electronic image stabilization, but it doesn’t look as good as GoPro’s. You can improve stabilization when using Sony’s new smartphone app which gives you great results, but you can only export the videos in HD.
DJI Osmo pocket is using mechanical stabilization with its 3-axis gimbal. That has pros and cons: I prefer using a gimbal rather than EIS since the image is stabilized as it is and not electronically corrected. This way you’ll be able to achive better results in low light situations. On the other hand Sony and GoPro are tough built cameras, no mechanical parts that can potentially break.

GoPro Hero7 and Sony RX0 II are tough built. The cameras are waterproof up to 10m without a case. If the lens scratches, no problem you can replace the outer layer easily. DJI Osmo Pocket seems more vulnerable, especially with its filigree gimbal. There is an optional cases to make it waterproof.

Slow motion is a great effect especially when doing sports activities. I always like to point out that it is an effect rather than a feature as it is a result of recording a video with a higher frame rate than using for playback. Hence you can slow down a 4K video on DJI Osmo Pocket and GoPro Hero7 black 50% (record at 60fps and playback at 30fps). Sony RX0 II doesn’t record a higher frame rate in 4K, but the HD options are impressive.
GoPro Hero7 black records 1080p with up to 240fps allowing a playback at 12,5% (8x) of the original speed while DJI Osmo pocket is limited to 120fps. Sony RX0 I allows you to shoot at frame rates of up to 1000fps. You can either capture 1080p with up to 120fps. Even though the files get recorded as 1080p the sensor readout number of effective pixels are 1000fps 1136×384.

GoPro Hero7 black is doing extraordinary well with its built-in microphone. Nevertheless an external mic, especially for vlogs, can increase you quality. Not only you can point them in your direction, you can also use fur covers in windy situations.
GoPro Hero7 black and DJI Osmo Pocket feature a USB type C port. You can get a USB-C to 3.5mm adapter for them to connect an external microphone. Sony RX0 II already has a 3.5mm jack built in.

DJI Osmo Pocket, at least for me, has a major downside: the battery is built in. You can power it via a power bank but then the handy size is gone. Hero7 black (be aware not silver and white!) as well as Sony Rx0 II feature an exchangeable battery. Especially for Sony this is highly needed as the battery only lasts for 35 min. recording time in 4k!

GoPro Hero7 black and Sony RX0 II offer photos in jpg and RAW format in 12 MP (GoPro) and 15 MP (Sony RX0 II) resolution. Osmo Pocket also offers 12 MP photos in .jpg or .dng (RAW), however I came to love another feature after using Osmo for a while. You can shoot panorama photos consisting of either 3×3 or 4×1 photos. When using the DJI Mimo app it will stitch your images at a lower resolution in jpg. But when enabling pro mode you can save all 9 (3×3) or 4 (4×1) photos in jpg or RAW to stitch them on your computer (DJI offers the DJI Media Maker or third party software). And that allows you to get high resolution photos, even in RAW format. As Osmo Pocket benefits from the gimbal the photos are stitched avoiding unnecessary overlapping.
The photo below is a 8685 x 5819 (50 MP) photo taken in RAW format. Click here for the full resolution photo (30MB).

Voice Control (Selfie Stick)
A really great feature for selfies (when the cam is mounted on a selfie stick). You don’t need a remote controller, just shout “GoPro take a photo”. There is a specific Osmo Pocket Selfie Stick, that holds buttons to operate the camera, but you are dependant on this expensive device. Sony offers a “Shooting Grip” a tripod/handgrip that holds record button, shutter & zoom levers and connects to the camera.

Object Tracking
Definitely a great feature, especially when you have to focus on several other things while vlogging. How does it work? On DJI Osmo Pocket you select an object or person and the gimbal’s head will follow it. The object doesn’t necessarily need to be centered, it can also be placed on the side of a frame which is very convenient.

Pros & Cons (in a nutshell) 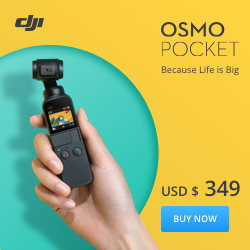 An alternative could be GoPro Hero6 black. Compared to Hero7 it doesn’t offer LiveStreaming and image stabilization is not as good. But it is way cheaper:

Sony RX0 II is not available yet and I didn’t had the chance to test it. The camera is tempting because of its large” sensor. Why? A larger sensor results in improved low-light performance and will likely increase dynamic range. Background blur is increased with a larger sensor, and that gives the video a more cinematic look that is missing on most action cameras. Compared to GoPro Hero7 black and DJI Osmo Pocket it seems the camera is a nice mix of some of their distinctive features. RX0 II is a sturdy camera like GoPro, but then offers a narrow field of view and a front facing screen like DJI Osmo Pocket. Nice to see an addition within this product range. I’ll update this article as soon as I can get my hands on a Sony RX0 II, the camera will be released in May 2019.

Since I already tested both of them here are my two cents: I like DJI Osmo Pocket when talking into the camera and doing mor “general” filming. I prefer the narrow field of view over the wide angle fisheye. The gimbal gives you some other nice options like motion time-lapses. When a tough camera is needed I’ll pack my GoPero Hero7. I like mounting my camera outside a car or on a motorcycle and I think the wind force for the gimbal would be too strong. They have some similarities: 4K 60fps, same size (different form factor though), similar price & super smooth footage. So it’s not about which camera is better, the main question is: Which camera is better for which situation? And has to be decided for oneself.

A few vloggers already had the chance to try Sony RX0 II, here’s a review from iJustine doing a vlog:

Here’s a review from iPhonedo, focusing more on the technical specs of RX0 II comparing it to RX0:

GoPro just announced their latest camera: GoPro Hero9 black, but what are the biggest changes? A...